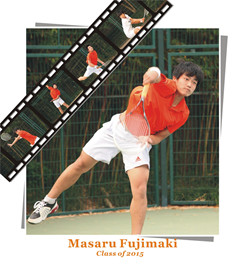 Masaru has gained his reputation for his talent in Tennis. He started the tennis training at the age of 8, and when he was 11, he already won his first champion in the China Open Rating Tour. Like the other athlete, he faces many injuries and challenges. Unlike his teammates who go to school for half day and train for the other, he had his daily 2-hour training after school. Yet, he feels lucky that his teachers and fellow students are all willing to offer the support he needs. He recognizes that his efforts are not just made solely for sports, but also benefit his personal growth. He hopes that his efforts will one day help him gain admission to a highly ranked university. He says, “In tennis, you need to learn to view the game from all respective and persistence is very important. The same also applies to any other career you plan to pursue in your life.”