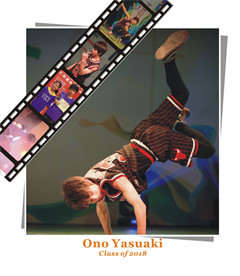 Yasuaki, monitor of class 2, is a popular student. He is also a leading member of school’s hip-hop dancing club and showed a wonderful dance performance at the school Art Festival. He began learning dancing in the 7thgrade when his friend first introduced him to a dance studio. He tried hip-hop first, but after observing those movements that his coach taught him, they were too fast and difficult for his little chubby body. He then realized that he should turn to something else. Hence, he picked up breaking-dancing. Breaking-dancing involves many difficult techniques and requires much physical strength and is way much harder than what he learned before. However, this also laid the foundation of his luck and fortune. He began to collect awards at various competitions and was invited to perform at different events. As a dancer, he still has tons of unfulfilled goals and is eager to achieve more.