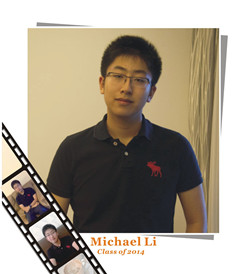 “Rank of Superior” at 2014 Intel International Science and Engineering Fair

Michael Li is an IBDP student who scored a perfect 45 point in his tests, one of the only 146 students worldwide achieved in 2014. He also took 15 AP exams and got full marks in 14 subjects, which broke the school records. However, he is not just another bookish honors student. As a team leader, Michael won “most outstanding” in 16thHMCIM. During his study in IBDP, Michael goes far outside his traditional knowledge zones and explores a lot. In his interview withthe Bund Education,he mentioned how Theory of Knowledge, one of the core components in IB Diploma program, helped him construct his own knowledge system. This course requires students to understand how Ways of Knowing affect how we analyze the different Areas of Knowledge. In his view, “after gaining certain amount of knowledge, it’s time to find where your true passion lies and further your study in a specific area”.