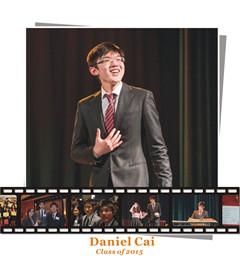 Theatre Productions:Footloose, Night Chills, In the Heights, Little Shop of Horrors, A Very

Daniel is the founder of SHSID's first drama club Live To Drama and co-president of Model UN. Having performed with Shanghai's longest running expat theatre group, East West Theatre, Daniel has applied what he has learned by directing his own plays and musicals at school. Encouraging others to be more expressive, guiding them to stay in character, and teaching them the basics of performance, in the past few years Daniel has given some very successful performances with the help of his co-directors and stage managers. He says, “Rather than making a half-hearted effort at everything, I enjoy doing something that I really love and making a difference.” He balances his academic and extracurricular activities well, and likes to reflect upon the process. This year, he received a perfect score of 36 on the ACT and was admitted to Yale University via Early Action.