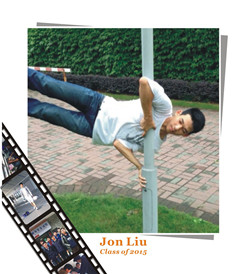 Awards: The Third Prize of Intel Science and Engineering Fair (National Qualifier Round)

The Third Place in the NAFT tournament for fencing

Jon has also been fencing since 9th grade and has practiced Wushu for over 7 years now. Being open-minded and caring, he is also the founder of Roots and Shoots Million Tree Project at SHSID. He has made great efforts in doing charity. He and his club members have organized various activities to raise money for the project. He also joined Stepping Stones, a not-for-profit charitable organization in Shanghai, to do volunteer teaching work in Shanghai’s migrant workers’ children schools. He is always interested in knowing more about applications of knowledge. With the help of his advisor, he did the research on “Identification and Characterization of Anti-CD22 Antibody”, concerning B-cell cancer and antibody research using ELISA and FAC analysis. This research was highly praised and won the 3rdprize in Intel Science and Engineering Fair.