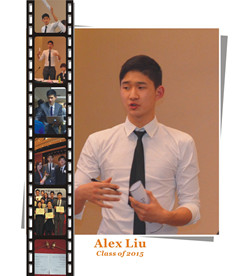 Alex is a versatile and considerate boy. As a veteran of ASB (the official student governing organization), he has worked as Treasure, Head of PR, Head of Design. He planned and organized a variety of school events. He has the talent to make powerful public speeches. He was the host of SHSBC and SHS Talk — the TV news and talk show programs about Shanghai High School students’ life edited and produced by students themselves. He is the current President of Model UN. He and his partner took part in Harvard Model UN Conference in 2014 and won the Award of Best Delegate. His suggestion for giving a public speech is to make sure you grab the audience’s attention and deliver your points effectively. The best way to overcome your fear on the stage is just to go out there and talk.